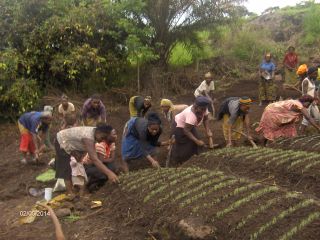 Women and men have not benefited equally from the increased use of diesel motor pump due to the limited know how by women to operate and manage the motor pump and also the continues fueling of the motor pump with diesel or petrol which expensive for women to purchase given that women are the household managers in most households in Cameroon. Solar water pumps are less expensive, quieter, and easier to use. The operating cost, after the price of the pump itself, is essentially free.  The introduction of solar water pumps for agricultural irrigation in some rural areas of Cameroon by FAP NGO Cameroon with reliable access to water, the women are able to produce many more vegetable crops in groups and individuals which has contributed to food security of their families as well as generate income when sold in local markets. This innovation has greatly contributed to diversifying household income through increase and sales food crops, particularly in the dry season, better food security and nutrition. Crops are also sold on the market, increasing women’s earning potential.                                                         In some rural areas in the Western Highlands of where FAP NGO Cameroon targeted, women are now able to grow vegetable gardens near their homes given the increased access to water from the solar pumps. In addition, the water user groups formed to manage these water resources have included women in leadership positions. This has led to positive changes in gender dynamics at the household level, such as reduced tensions between women and men, more shared decision-making at household level and increased skills in water management for women.

But solar pumps start with the push of a button, and that could make an important difference for women – who often grow their own vegetables for the market, keep the income, and increasingly must replace men who are absent as migrant labourers.

Solar pumps are as powerful as diesel pumps, but cleaner, less expensive, quieter, and easier to use. The operating cost, after the price of the pump itself, is essentially free. The added findings on gender equity could make them an even more realistic alternative.

In 2013-14  FAP NGO Cameroon started a project to empower women economically through trainings and support on irrigation farming  ( market gardening) , the initiative actually gave the small holders farmers some income from their produced but the farmers faced a lot of challenges in lefting water from streams and canals to the farms, they uses watering cans which was labour intensive running to the stream and back with less than 15 litres water in the watering can. Although they tried to supply water to the crops, water was not sufficient for the crops which resulted to low crop yield.( Pictures above)

In 2015 FAP NGO Cameroon introduced a drum system where a platform with poles are constructed some 2m or 3m  above river or stream and  the farm, a tank of 200 litres is placed on the platform with  a lader attached to the platform used to climb on the platform by the farmer, a 20 litres bucket is attached to a twine where the farmer uses the bucket and the twine to pull water from the stream or river to the tank of 200 litres drum or tank. This tank is connected with a PVC pipes that takes water from the tank to the farm. (pictures below)

This initiative was very risky and ineffective in some areas. The risk of accident was very evident and only men tried it so it was gender bias.

Some farmers had to buy motor pump though very expensive to irrigate their farms, they were later faced with the problem high cost fuel and maintenance with the issue of noise and pollution to name these few.


In 2016 FAP NGO Cameroon continued to research with partners for lasting innovative solution to the irrigation problem here in the western Highlands Cameroon and Cameroon in general, we started the solar pump initiative with its numerous economic , social and environmental benefits to small holders farmers including;

·         Food security will be improved with the changes in irrigation technologies and agricultural practices.

·         Financing and cost of solar panels continue to drop, making the partnership project economically viable and competitive with other sources of energy

·         Reduced cost for water pumping in the long run. If system is being modernized for pressurized irrigation, increases in energy costs are offset through the use of solar energy.

·         Potential time saving due to replacement of labour intensive manual irrigation, which can lead to other income-generating activities. Women and/or children might profit from time not spent on watering anymore